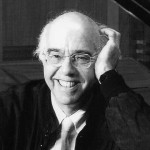 Awarded the 2006 Pulitzer Prize for his Piano Concerto, “Chiavi in mano”, Yehudi Wyner is one of America's most versatile musicians. His compositions include over 60 works for orchestra, chamber ensemble, solo voice and solo instruments, piano, chorus, and music for the theater, as well as liturgical services for worship. He has received commissions from Carnegie Hall, the Boston Symphony, the BBC Philharmonic, the Santa Fe Chamber Music Festival, the Library of Congress, the Ford Foundation, the Koussevitzky Foundation, the National Endowment for the Arts, the Fromm Foundation, and Worldwide Concurrent Premieres among others. His recording “The Mirror” on Naxos won a 2005 Grammy Award, Chiavi in Mano on Bridge Records was nominated for a 2009 Grammy, and his Horn Trio (1997) was a Finalist for the Pulitzer Prize.

Yehudi Wyner has also had an active career as a solo pianist, chamber musician collaborating with notable vocal and instrumental colleagues, teacher, director of two opera companies, and conductor of numerous chamber and vocal ensembles in a wide range of repertory. Keyboard artist of the Bach Aria Group since 1968, he has played and conducted many of the Bach cantatas, concertos and motets. He was on the chamber music faculty of the Boston Symphony’s Tanglewood Music Center from 1975-97.

He has been composer-in-residence at Civitella Ranieri (2009), the Eastman School of Music (2008), at Vassar College (2007), at the Atlantic Center for the Arts (2005), at the Rockefeller Center at Bellagio, Italy (1998), at the American Academy in Rome (1991), and at the Sante Fe Chamber Music Festival (1982). He was a professor at Yale from 1963-1977, where he served as head of the Composition faculty, and he became Dean of the Music Division at SUNY Purchase in 1978, where he taught for twelve years. A guest professor at Cornell University in 1988, Mr. Wyner has been a frequent visiting professor at Harvard University since 1991. From 1991-2005, he held the Walter W. Naumburg Chair of Composition at Brandeis University, where he is now Professor Emeritus.

Born in Western Canada, Yehudi Wyner grew up in New York City. He came into a musical family and was trained early as pianist and composer. His father, Lazar Weiner, was the preeminent composer of Yiddish Art Song as well as a notable creator of liturgical music for the modern synagogue. After graduating from the Juilliard School with a Diploma in piano, Mr. Wyner went on to study at Yale and Harvard with composers Paul Hindemith, Richard Donovan, and Walter Piston. In 1953, he won the Rome Prize in Composition enabling him to live for the next three years at the American Academy in Rome, composing, playing, and traveling.

Give Thanks for All Things

When David invited me to write a piece for the Cantata Singers, I proposed a Comic Cantata. I thought I’d had enough of the high rhetoric of elevated sentiments, of moralistic parables, of passionate religious narratives, of confrontations with death and the hereafter. I searched in vain for a text, a scenario. I sought guidance from the fellowship of eminent living poets but nothing lit the fire of fun I was seeking. Finally I abandoned my original idea and turned to a slender sheaf of poems I’d been assembling over several years. Most were old: biblical psalms, Cato fragments, Shakespeare, Medieval Irish, but also Whitman and a recent psalm by Richard Wilbur. With the exception of the biblical psalms the texts were about death and grieving...the ultimate comedy?