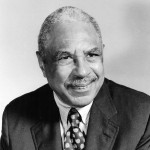 T.J. Anderson is one of the leading composers of his generation. He was born August 17, 1928 in Coatesville, Pennsylvania and received degrees from West Virginia State College, Penn State University, and a Ph.D in Composition from the University of Iowa. He also holds several honorary degrees. After serving as Chairman of the Department of Music at Tufts University for eight years, Thomas Jefferson Anderson became Austin Fletcher Professor of Music and in 1990 became Austin Fletcher Professor of Music Emeritus. He now lives in Chapel Hill, North Carolina where he devotes full time to writing music.

He studied composition with George Ceiga, Philip Bezanson, Richard Hervig, and Darius Milhaud. Anderson is well known for his orchestration of Scott Joplin's opera, Treemonisha which premiered in Atlanta in 1972. His first opera, Soldier Boy, Soldier based on a libretto by Leon Forrest, was commissioned by Indiana University. The opera, Walker was commissioned by the Boston Athenaeum with a libretto by Derek Walcott and Slip Knot, commissioned by the School of Music, Northwestern University is based on a historical paper by T.H. Breen with libretto by Yusef Komunyakaa.

Mark DeVoto, in program notes for a concert of T.J. Anderson's music honoring the 100th year of Tufts University's Department of Music, says: "T.J. Anderson, as all the world knows him, has spent a long and distinguished career composing music reflecting a global awareness of human experience in the twentieth century, synthesizing Eastern and Western classical traditions with the Black experience in America. His works reveal inspiration from a variety of classical styles ranging from Purcell to Alban Berg, and techniques and forms ranging from the serially rigorous to the freely improvisatory, all arrayed in a stylistic panorama that is wholly "his own". Elliott Schwartz states, “Many African-American composers of “classical” music are confronted by a unique set of experiences – influences from two worlds, so to speak. Thomas Jefferson Anderson has successfully balanced both; his music speaks to, and draws from, the heritage of European Art Music and the culture of Black America.” (Elliott Schwartz and Barney Childs, ed: Contemporary Composers on Contemporary Music, 1998) “T.J. Anderson has characterized his role as a composer as that of a musical anthropologist, that is a documentor, interpreter, and re-creator of culture” (Greg A. Steinke: International Dictionary of Black Composers, 1999)

T.J. Anderson takes pride in collaborations with his distinguished friends Leon Forrest, writer and Richard Hunt, sculptor. A number of his works have been premiered in the artist's studio. As a lecturer, consultant, and visiting composer, he has appeared in institutions in the United States, Brazil, Germany, France, and Switzerland. He has been a fellow at the MacDowell Colony, Yaddo, Virginia Center for the Arts, the Djerassi Foundation, the National Humanities Center(their first composer), and a scholar-in- residence at the Rockefeller Center for the Creative Arts, Bellagio, Italy. Anderson was singularly honored when Bruce Alfred Thompson devoted his Ph.D. dissertation at Indiana University to an analysis of his works. Other honors include an honorary membership in Phi Beta Kappa, a fellowship from the John Simon Guggenheim Foundation, and a Rockefeller Center Foundation grant, Composer-in- Residence Program (with the Atlanta Symphony Orchestra, Robert Shaw, Conductor). At his 60th birthday celebration at Harvard University, letters from Robert Shaw and Sir Michael Tippett were read. In March, 1997, he was honored as a founder and first president of the National Black Music Caucus with concert of his music. He was elected to the American Academy of Arts and Letters, May 18, 2005.

Why would anyone want to write a composition about slavery at the beginning of the 21st century? The answer for me can be found in Ira Berlin's article in The New York Times (7/13/01). Author of Many Thousands Gone; the First Two Centuries of Slavery in North America, Berlin cites recent publications of fifty scholarly books, dozens of exhibitions at museums, proliferation of web sites, new children's books, and the DNA confirmation of Thomas Jefferson's relationship with Sally Hemings, as part of the reasons for an aroused interest in this "peculiar institution." There is now a recognition that racism in America has its foundation in slavery and we as Americans must address the remaining issues. However, my particular interest comes from my association and friendship with Donald Sur, composer of Slavery Documents commissioned and performed by the Cantata Singers in 1990.

When I received a call from David Hoose, Music Director of the Cantata Singers, regarding a commission, I immediately contacted Loren Schweninger, a professor at the University of North Carolina, Greensboro, and a former student of John Hope Franklin. Loren and his staff have identified and put on the computer approximately thirty-eight thousand documents related to slavery. I identified five areas of antebellum conditions for blacks which I thought deserved exploration: Work As Labor, Bestiality, Runaways, Love and Family Life, and Spiritual Redemption. The staff proceeded to gather documents and happily complied to my request. Because of the lack of primary materials, "Work as Labor" became "Petitions" and "Spiritual Redemption" became "Spirituals Sustain."

I began to look for words that would sing to me. The choice of poetic lines in the first four sections are all in Prof. Schweninger's book, The Southern Debate Over Slavery, 1778-1854, and the last section is based on the words of Negro Spirituals. The result is Slavery Documents 2, a work in five contrasting movements.

The first movement, "This We Ask" is a ritornello based on petitions presented to the General Assemblies from those seeking justice. The African talking drum serves as a continuous reminder of a glorious past. The work closes with these important words, "This we have said."

The second movement, "Compensation for Horrible Acts," is a lamenting ballad which documents what can only be called bestiality. The structure of ternary form (ABA) is used. After an instrumental introduction a rhapsodic sweep of tragic melodic moods tells the story of violent plantation life.

"Runaway, Runaways," the third movement, is greatly influenced by the book, Runaway Slaves by John Hope Franklin and Loren Schweninger. The book clearly establishes a troubled culture in which slaves headed south in large numbers to find their loved ones as well as running North in search of freedom. The southern plantation was not a happy place. The first section begins with motor rhythms, repetition and chords of agitation. The second section is episodical and contrasting. In closing, continuity is articulated in the word, "runaway." This section, melismatic and reflective in spirit, is reminiscent of the first section in tempo.

"Education Denied," the fourth movement, is through composed. Instrumental interludes lead to choral homophonic deliverance of the text. The chorus is joined by solo and ensemble instrumental commentary. This is followed by cadential gestures. This progression or a cadence rhyme is intended to trigger imagination for contemporary definitions to the present meanings of the text.

The last section, “Spirituals Sustain,” begins with a ground bass theme that leads to a section of text from Donald Sur’s Slavery Documents, “Who is that Great GOD whom you and all men are here to serve?” When all hope is lost music has the power to sustain all dreams. The movement is a passacaglia that leads to a blues structure. All these forms, blues and spirituals, are extended into a technique that fits the character of the work.

The oratorio is influenced by the music of Africa as well as composers, Carissimi, Handel, Bartok, and Tippett. The African American tradition of Negro Spirituals, the Blues, and Jazz were also inspirational.