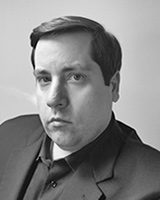 Stephen Williams, tenor, is an honors graduate of New England Conservatory where he studied voice and opera with William Cotten and Kayo Iwama. He has appeared as a soloist with the NEC Chorus and Chamber Singers, the Holy Cross Chamber Orchestra in scenes from Mozart’s Clemenza di Tito and Coronation Mass, and the Boston-based vocal octet Vox Consort, presenting performances of Bach’s Mass in B minor and Magnificat. In his seven seasons with Cantata Singers, he has appeared as a soloist in the Boston premiere of Zelenka’s Missa Votiva, Beethoven’s Mass in C, Schütz’s Musikalische Exequien, Monteverdi’s Vespers of 1610 and Laetatus sum, Mendelssohn’s Elijah, Rachmaninoff’s All-Night Vigil, and in several chamber series concerts. Mr. Williams is a teacher and chorus director at Austin Preparatory School in Reading, and he serves as the choir director at St. Joseph Parish in Holbrook.