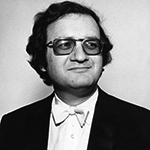 Michel Sasson conducted Cantata Singers at part of the Boston Bach Festival at the Hatch Shell in Boston, during the summer of 1972. The program included Bach Cantatas 140 (“Wachet auf”), 10, and 79, as well as the first three Brandenberg concerti, and the third and fourth orchestral suites.

Mr. Sasson was born in Alexandria, Egypt. He performed the Mendelssohn Violin Concerto with the Cairo Symphony when he was eight, studied with Nadia Boulanger in Paris, and, at seventeen, became the youngest musician to become a member of the Boston Symphony Orchestra. In 1975, Mr. Sasson founded the Newton Symphony, and he served as music director simultaneously with Boston Ballet, Boston Civic Symphony, and the Brockton Symphony. For eleven years he was resident conductor at Teatro alla Scala, and for two years he was principal conductor with the Bonn Opera. He also appeared with the Vienna Symphony and the Shanghai Philharmonic, and he was appointed general music director of the Istanbul State Opera. Mr. Sasson resided in Brookline, Massachusetts until his death in 2013.