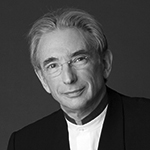 During his years in Boston, Michael Tilson Thomas was an assistant conductor of the Boston Symphony Orchestra, where he designed and led the Spectrum Series that introduced music foreign to the regular subscription series. He also conducted a chamber orchestra of professional freelance musicians, the Boston Philharmonia, an ensemble in performing adventurous orchestral music not being heard elsewhere. Cantata Singers appeared with him and the orchestra at a benefit concert that presented music by Charpentier and Beethoven, as well as Stravinsky’s Abraham and Isaac.

Mr. Thomas is currently Music Director of the San Francisco Symphony, Founder and Music Director of the New World Symphony, and Principal Guest Conductor of the London Symphony Orchestra. Mr. Tilson Thomas is a Chevalier dans l’ordre des Arts et des Lettres of France, has been Musical America’s Musician of the Year and Conductor of the Year, was Gramophone Magazine’s Artist of the Year, and has been profiled on CBS’s 60 Minutes and ABC’s Nightline. He has won ten Grammy Awards for his recordings. In 2008 he received the Peabody Award for his radio series for SFS Media, The MTT Files. In 2010, President Obama awarded him with the National Medal of Arts, the highest award given to artists by the United States Government.