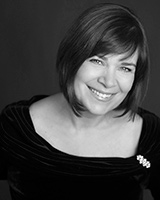 Mezzo-soprano Majie Zeller has received critical praise for her performances of opera, oratorio, and song. Ms. Zeller joined Cantata Singers in 1992, and she has been a soloist in Mozart's C Minor Mass, Bach's Saint Matthew Passion and B minor Mass, Schumann’s Scenes from Goethe’s “Faust”, Mozart's Requiem, and many Bach cantatas. She appeared as Mother Goose in The Rake’s Progress and Mrs. Noye in Noye’s Fludde. She can be heard on Cantata Singers’ recording of John Harbison’s Four Psalms (New World Records), and she has sung the premieres of works by Marjorie Merryman, John MacDonald, James Yannatos, and fellow Cantata Singer Charles Turner.

Ms. Zeller's operatic appearances include roles in Nixon in China, Candide, and Ainadamar with Opera Boston, as well as Madama Butterfly, Akhnaten, and Resurrection with Boston Lyric Opera. She was one of the Liebeslieders in the acclaimed production of A Little Night Music by Emmanuel Music, with whom she has been a soloist. She has also been a soloist with Boston Classical Orchestra, Monadnock Music, Granite State Opera, Longwood Opera, Michigan Opera Theater, and many other ensembles, including appearances in the Mozart roles of Dorabella in Cosi fan Tutte and both the Second Lady and the Third Lady in The Magic Flute (although not at the same time).

Ms. Zeller is the user experience design team lead for Dassault Systemes Solidworks, which develops 3D design software for engineers, designers, and other technology professionals. Previous experience includes roles as a team leader in user-experience design at Nokia and IBM. She is a current Cantata Singers board member and a former board chair.