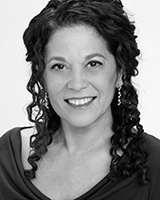 Lynn Torgove, mezzo soprano, is a long-time member of Cantata Singers, and she is well known to Boston audiences both as singer and stage director. With Cantata Singers, she has appeared as a soloist on many occasions, including the world premiere of John Harbison’s The Supper at Emmaus, Mendelssohn’s Elijah, Harbison’s Four Psalms (recorded for New World Records), Bach’s St. John Passion and St. Matthew Passion, and many Bach cantatas, including Cantata BWV 60, “O Ewigkeit, du Donnerwort,” during the 2015-16 season. She also sang the role of Maura in Cantata Singers’ semi-staged performance of Ralph Vaughan Williams’ opera Riders to the Sea.

As a stage director, Ms. Torgove directed the Cantata Singers productions of Stravinsky’s The Rake’s Progress, Britten’s The Little Sweep and Noye’s Fludde, Hans Krása’s opera Brundibár, and “A Kurt Weill Cabaret.” She has also been stage director of productions of Sullivan’s The Zoo and Walton’s The Bear (Odyssey Opera), Menotti’s Amahl and the Night Visitors (Tallahassee Symphony Orchestra), Purcell’s Dido and Aeneas and Foss’s Griffelkin (MIT), John Harbison’s Full Moon in March (BMOP), and productions with Collage New Music and Opera New England/Boston. A recipient of the Gideon Klein Fellowship from Northeastern University, Ms. Torgove created, produced, directed and performed in the cabaret “Frauenstimmen: Women’s Voices from the Ravensbrück Concentration Camp.”

Ms. Torgove is also a member of Emmanuel Music, with whom she was stage director and sang the role of the Tango Singer in John Harbison’s The Great Gatsby, directed and sang the role of Desirée Armfeldt in Stephen Sondheim’s A Little Night Music, and sang the role of Anna 1 in the organization’s joint production with Urbanity Dance of Weill’s Seven Deadly Sins. Ms. Torgove gave a recital of Harbison songs at the Longy School of Music and performed Fauré’s La bonne chanson with the Lydian String Quartet. She has been featured as a soloist with Aston Magna, Zamir Chorale of Boston, Opera Boston, Boston Camerata, Tallahassee Symphony Orchestra, Portland Symphony Orchestra, and the St. Louis Symphony. With Boston Modern Orchestra Project, she recently sang and recorded the role of Commere in Virgil Thomson’s Four Saints in Three Acts, as well as the role of the She-Ancient in Sir Michael Tippett’s Midsummer Marriage.

Ms. Torgove has been on the faculties of the Opera Institute at Boston University, New England Conservatory, Boston Conservatory, and the Walnut Hill School for the Arts. She teaches at the Longy School of Music and at Hebrew College, where she is the Head of Vocal Arts. She received her Masters in Jewish Studies from Hebrew College and was recently ordained as a cantor.