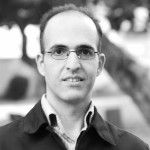 Composer Lior Navok has earned his place as one of the most innovative, fresh, and communicative composers of the younger generation. His music, emerging from reflections on nature and humankind, bridges between the realistic and the mysterious, the conscious and unconscious. Described by the Boston Globe as "colorful, haunting, accomplished and exciting," Navok's music takes listeners into revealing journeys through sound.

He received his DMA and MM from the New England Conservatory where he studied composition with John Harbison, and a double Bachelor's Degree from the Rubin Academy of Music, Jerusalem, where he studied with Yinam Leef. Mr. Navok now lives in Berlin, Germany.

And the Trains Kept Coming…

The horrifying stories and testimonies sparsely arrived from the Nazi death camps during World War II became gradually known to the allies through survivors who escaped death, intelligence agencies and the common people who used to live close by to the camps. It is hard to believe that the world, though immersed deeply in its own problems formed by the war, could not grasp the scale of tragedy that was taking place at the death camps, and when it could—did not do much.

Was there anything the Allies could do? It is true that the British people had to overcome the blitz and maintain the existence of their country, while the Americans, after being attacked in Pearl Harbor, found themselves on several frontiers simultaneously. When exhausted armies try to fight for the existence of their countries, when food is unavailable and blood is spilled in every corner of major European cities—does anybody have the time, means and will to stop the mass murder of six million Jews, one-half million Gypsies and at least 250,000 mentally or physically disabled persons, and more than three million Soviet prisoners-of-war?

Did the allies know what was going on in the camps? The answer is—Yes. Yet, there were several stages along the way: First, only a few intelligence reports mentioned the mass murder that took place in East Europe. Then, testimonies from people who were lucky to escape the Nazi inferno arrived, but these were partly dismissed as all testimonies were assumed to be exaggerated and delusional. There was also a phase of denial—matching testimonies pointed out that the previously defined goals, publicly stated by the Nazi regime—namely, the termination of all Jewish people—were in operative stages, yet, only few people could digest the figures, the horrors and the inhumanity. This denial at earlier stages of the war was also typical to the Jewish communities in the United Kingdom, United States and the yet-to-be-born state of Israel.

At early stage of the war, allied armies indeed could not reach East Europe but at a later stage, from August 1944, airplanes frequently passed over near the death camps, which were continually running at full capacity. When thousands of bombs fell over Germany in order to weaken the Nazi forces, and when hundreds of pleading letters and telegrams were piled at the war departments of the British and US armies, why did nobody give the order to bomb the tracks to Auschwitz and other camps, not to mention the gas chamber and crematoria? Such actions could have prevented the deaths of thousands. Evidences of survivors mentions the strong wish to be bombed by the allies’ airplanes, as this gave them a better hope than the certain death waiting at the gas chamber. Why was nothing done?

With that question in mind, I have started researching various archives, tracing authentic letters, memos, telegraphs, protocols and other means of correspondence between the Allies. Most of them were previously marked as “secret” or “confidential.” The findings are quite shocking. The slow wheels of bureaucracy, the careless diplomats and decision makers, the officers who sat in their remote offices and considered victims and refugees as numbers on the page, ignoring pleas and answering in a cold bureaucratic manner to matters of life or death, all contributed to the lack of action. In some cases, and especially with the British Colonial Office—which dealt with the refugees issue—officers at all ranks made efforts to halt, delay and divert refugees into another whirlpool of insecurity, sometimes as if passively, yet actively, sentencing them to death. While leaders of the allies released emotional statements supporting refugees, their subordinates acted quite the opposite.

These bureaucratic, robotically written documents are naturally very cold and selfishly efficient. Another type of “efficiency”, though more vicious and hair-rising, is the Nazi bureaucratic correspondence: train schedules, stating origin, destination, time and number of “passengers.” On their return, the trains traveled empty; all was done according to schedule. For me, trains always symbolized freedom—discovery of new landscapes, motion, and optimism. Here the trains are trains of horror, where 80-100 people were shoved into a cattle car with no water or food, traveling for days, sometimes weeks while standing on dead bodies en route “unknown destination.”

And yet, with all this cold correspondence—the real suffering is that of the individuals. I researched and found hundreds of testimonies, from people who were trapped in the trains, people who escaped the camps, adults who told their childhood stories, people who watched the Allies' airplanes fly over Auschwitz, and even a woman who was already inside the gas chamber and miraculously released. I found heart–rending letters and farewell notes that were written and concealed in the cracks of the barracks by prisoners on their last day on earth. These evidences are clearly the complete contrary to the dry and mechanical correspondences.

Thus, And the Trains Kept Coming… juxtaposes these heart breaking documents with the cold and calculated ones, slowly unveiling the tragedy. Following the nature of each document, the work is structured as a series of un-staged scenes which change quite rapidly; each contributes another perspective to the broad picture. Unlike in opera, where each singer usually portrays one character (unless if under disguise), here, the vocal soloists, narrators and choir portray multiple characters, contradicting each other. This result is that the distinction between good and bad becomes blurry—a feeling that many survivors have mentioned. The choir for example, portrays the voice of the people, acting as a Greek choir, or as a catalyst, thus pushing the plot forward. The work as a whole is in one movement, built in chronological order according to the historical developments.

While And the Trains Kept Coming… focuses on the Holocaust and its graveness, it reflects as well the ability of humans to ignore the suffering of another nation or individual. This of course still takes place today (Summer 2007), ranging from the genocide in Darfur to events in the Middle East to the homeless lying on the curb next to the local drugstore.

I would like to thank and credit the following people and institutes: