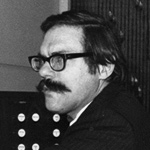 As the first Music Director of Cantata Singers, Leo Collins brought together a group of young musicians eager to explore and confront the challenges of Johann Sebastian Bach’s sacred cantatas. During the eighteen concerts he conducted, Mr. Collins and Cantata Singers performed only music of Bach (with one exception), and together they established a standard of musical excellence and innovation that has only grown throughout the organization’s fifty years.

Committed to church music in the Unitarian Universalist tradition, Mr. Collins served as Music Director at First Church in Boston for thirty-three years, from 1964 to 1997. His tenure was the longest of any music director in the church’s history. Collins changed the culture of First Church, working to make music a greater part of the church’s efforts by raising funds, organizing, and leading musical performances beyond the regular church services.

Collins was instrumental in furthering musical programming in the Unitarian Universalist Church as a whole, and he served as the president of the Unitarian Universalist Musicians Network from 1985 to 1987. He also composed, compiled and published hymn books, revived the First Church’s Singing Society, and organized a series of workshops for hymn writers. An archivist, Massachusetts Historical Society fellow, and author, Collins wrote This is Our Church: The Seven Societies of the First Church in Boston 1630-2005, a book detailing the long and rich history of First Church.