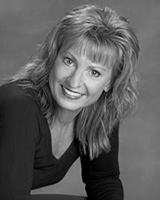 Karyl Ryczek, soprano, has enjoyed a varied and rich performance career on the opera, oratorio and concert stages. Her singing has been described as intelligent, dramatically informed and in possession of opulent tone. A frequent soloist with the Cantata Singers, Ms. Ryczek has also appeared with Boston Baroque, the Monadnock Music Festival, Boston Musica Viva, and Warebrook Festival in addition to numerous orchestral engagements. Ms. Ryczek made her Symphony Hall debut with the Cantata Singers in a world premiere of T.J. Anderson’s Slavery Documents II and in a remounted performance of Donald Sur’s Slavery Documents.

She made her Boston operatic debut with Collage New Music in a premier of Charles Fussel’s chamber opera, Astronaut’s Tale. Ms. Ryczek also created the role of Madame Dubarry in the opera Grace, a production created for Opera on the Edge.
She has performed the widely popular Third Symphony of Gorecki with the Boston University Orchestra and she has performed Robert Kapilow’s children’s operas, Green Eggs and Ham and Gertrude McFuzz with the Atlantic Symphony. She has twice performed Samuel Barber’s Knoxville: Summer of 1915 at Harvard’s Sander’s Theater and the Longy School of Music’s Pickman Hall.

Favoring the recital stage, Ms. Ryczek has sung the Boston premieres of Aaron Jay Kernis’ song cycle Valentines, and Revol Bunin’s Russian song cycle Romance. She has also premiered the work of John Harbison, Charles Fussell, Lior Navok, Paul Brust and Marti Epstein. Ms. Ryczek has performed with the Grammy Award winning Pacifica String Quartet at Cambridge’s renowned Regatta Bar. She has also been a soloist with the Boston Chamber Music Society and on the Music at the Institute Chamber Series at the Ukrainian Institute of America, NYC. Ms. Ryczek is currently completing a certificate program for Music Healing Therapeutic Practice (MHTP), and plans to provide one on one music healing sessions in hospitals and nursing facilities.

After 15 years serving as an Assistant Dean and in several Department Chair positions in the Academic Affairs division of the Longy School of Music, Ms. Ryczek has returned to full time vocal instruction at Longy. She has been an active member of the Cantata Singers since 1995.