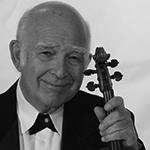 As Guest Conductor with Cantata Singers in 1970, Joseph Silverstein led a program of music by F.J. Haydn and William Byrd. On this concert he also played and conducted the Haydn C Major Violin Concerto.