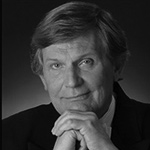 As an orchestral conductor, Flummerfelt made his debut with the New York Philharmonic, conducting Haydn’s “Creation” in 1988. In 2001, he conducted the world premiere of Stephen Paulus’ Voices of Light with the Philharmonic and the Westminster Choir. He has also appeared as guest conductor with the New Jersey Symphony Orchestra, Orchestra of St. Luke’s, the Juilliard Symphony Orchestra, and the San Antonio and Phoenix Symphonies. He has also conducted over 60 choral/orchestral performances with the Spoleto Festival Orchestra in the United States and Italy.

For over four decades Flummerfelt has collaborated in the preparation of hundreds of choral/orchestral performances and recordings with such conductors as Abbado, Bernstein, Barenboim, Boulez, Chailly, Colin Davis, Gilbert, Giulini, Maazel, Masur, Mehta, Muti, Ozawa, Sawallisch, Shaw, Steinberg. In addition to the New York Philharmonic and the Philadelphia Orchestra, Flummerfelt’s choirs have performed with numerous other American orchestras, as well as European orchestras, including the Berlin Philharmonic, Vienna Philharmonic, the Gewandhaus Orchestra and the Royal Concertgebouw Orchestra.

For 33 years Joseph Flummerfelt served as artistic director and principal conductor of Westminster Choir College of Rider University in Princeton, New Jersey – a position from which he retired in 2004. He began his academic career as director of choral activities at his alma mater, DePauw University, from 1964 to 1968. He served in the same capacity at Florida State University from 1968 to 1971, when he began his tenure at Westminster. Since retiring from Westminster, Flummerfelt has held many visiting professorships and conducted many performances at a number of universities, including, among others, Eastman School of Music, University of Texas, New England Conservatory, University of Illinois, Kansas City Conservatory of Music and DePauw University. For 37 years he served as director of choral activities for the Spoleto Festival U.S.A. in Charleston, South Carolina, from which he retired in 2013, and for 23 years was the maestro del coro for the Festival dei Due Mondi in Spoleto, Italy. A master teacher, Flummerfelt’s many former students occupy a number of major choral positions throughout the United States.