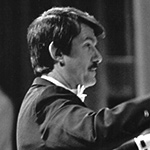 John Ferris, music director from 1976 to 1980, was a distinguished organist, choirmaster and conductor, long recognized in the Boston area for his performances of Bach and for his dedication to early music. Mr. Ferris conducted Cantata Singers’ first performances of Bach’s Magnificat, the Saint John Passion, and the Mass in B Minor, works that now stand at the cornerstones of its repertoire. Just as John Harbison had stretched the organization into the 20th century, Mr. Ferris opened the Cantata Singers to earlier music, including that of Giovanni da Palestrina, William Byrd and Henry Purcell. He also led the group into the 19th century, giving the first Cantata Singers performances of a cappella works of Schumann and Brahms. His performances with Cantata Singers (and with his groups at Harvard) were loved for the warmth, generosity and poise that he brought to the music.

Shortly after receiving a Master of Sacred Music from the Union Theological Seminary, Mr. Ferris was appointed Organist and Choirmaster at Harvard University’s Memorial Church. He held this position from 1958 to 1990, where he conducted the University Choir and taught hymnology in the Divinity School. He also taught choral conducting and worked with the Harvard Summer School Chorus.

Mr. Ferris served as Dean of the Boston Chapter of the American Guild of Organists, appeared in a series of organ recitals sponsored by the Boston Symphony Orchestra, and presented concerts from coast to coast. After retiring from Harvard, Ferris traveled widely as a guest lecturer and served as Director of the Choir at the Congregational Church in Colebrook, Conneticut.