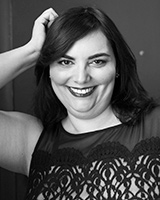 Mezzo-soprano Jennifer Webb joined Cantata Singers in 2011. She has appeared as a soloist with the ensemble and in the Chamber Series on many occasions, including Mendelssohn’s Elijah, Bach cantatas, the Magnificat and B Minor Mass, Handel’s Israel in Egypt, and works by Zelenka, Lazar Weiner, Irving Fine, and John Harbison. In 2018 she was a soloist in the world premiere of Peter Child's Lamentations, commissioned by Cantata Singers, and in 2019 she premiered two new songs by Marjorie Merryman. Her 2019-2020 season features Hildegard von Bingen’s Ordo Virtutum with Cappella Clausura, and performances at King's Chapel as a member of their choir.

Ms. Webb appeared in the first staged performance of Elena Ruehr’s Cassandra In the Temples and the premiere of Ruehr’s Crafting the Bonds with Cappella Clausura, and Copland’s In the Beginning with the Oriana Consort. She also appears on two recordings as a member of the Christmas Revels Chorus. She graduated from Oberlin College, where her love for early music was sparked in the Oberlin Collegium Musicum. Ms. Webb is also a librarian at Lexington’s Cary Memorial Library.