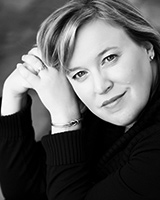 Jennifer Kane is an active conductor of ensembles that specialize in treble repertoire, and she is in her second season as music director of Cantilena. Ms. Kane is also on the education faculty of the Handel & Haydn Society as Conductor of the H&H Singers, Youth Chorus, and Concert Choir. This season, she was also appeared as guest conductor with the Concord Women’s Chorus.

Ms. Kane has been Artistic Director of the Worcester Children’s Chorus, Artistic Director of the Spivey Hall Young Artists, one of the training choirs for the nationally renowned Spivey Hall Children’s Choir, and Artistic Director of Atlanta Schola Cantorum, an ensemble specializing in Renaissance polyphony and contemporary compositions. She has prepared ensembles for collaborations with Handel & Haydn Society, Back Bay Chorale, Boston Musica Viva, Boston Symphony Orchestra, and the Worcester Chorus. Also an active adjudicator and clinician, Jennifer Kane received a BA in Music from Furman University, an MM in Choral Conducting from Georgia State University, and a DMA in Conducting from Boston University.

Cantilena is a forty-voice women’s chorale dedicated to performing music for the treble voice. Cantilena’s repertoire reaches from the fifteenth to the twenty-first century and includes works in many different languages and musical forms. One of the goals of the ensemble is to introduce both its members and its listeners to works they are unlikely to encounter in other forums. The chorus was founded in 1968 as the Cambridge Chorale, an ensemble of mixed (SATB) voices. In 1980, the group became a women’s chorus and, in 2000, the ensemble’s name became Cantilena.