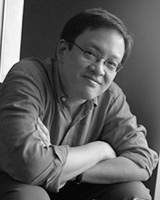 James attended medical school in New Jersey, did a residency in Internal Medicine at Tufts-New England Medical Center, a fellowship in Medical Informatics at Yale, and spent a year in Changsha City, Hunan Province, mainland China, teaching English to doctors, nurses, and medical students. He returned to Boston in 1999 and became a primary care physician at Harvard Vanguard Medical Associates. He currently serves on Cantata Singers' Board of Trustees.

He is indebted to his voice teacher, Frank Kelley, and to his infinitely patient wife who makes all of this possible.