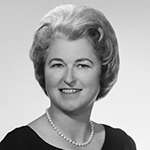 Iva Dee Hiatt was the founder of the Smith College Chamber Singers at Smith College, where she taught for thirty-one years. Through her collaborations with other area colleges, including Wesleyan, Harvard, and Amherst, she exposed many students to an unusually broad range of music. Her musical interests reached from the old to the new, and they included Bartòk’s Cantata profana, which she had her students perform in the original Hungarian.

For twelve years, Hiatt was Music Director of the Cambridge Society for Early Music, and she was founder and Music Director of the Choral Institute in Johnson, Vermont. She was a pupil of Ernest Bloch, Roger Sessions, Randall Thompson, and Arthur Bliss. She received an Honorary Degree, Doctor of Music, from New England Conservatory, and an Award for Outstanding Service for her assistance to the International Communication Agency of the State Department in advancing understanding and good will between people of the U.S and people of other countries.

Ms. Hiatt’s program with Cantata Singers reflected one of her particular interests, English Renaissance and Baroque music, and included music of Byrd, Purcell, and Bach.