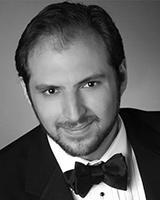 Bass-baritone Ian Pomerantz has been a member of Cantata Singers since 2013, and is a frequent soloist throughout the New England region. He has performed with the New York Philharmonic, the Dresden Philharmonic, the Philadelphia Orchestra, the Cleveland Orchestra, and the Lucern Festival Orchestra. Recent performances include the North American premiere of Philippe Courbois’ Orphée, Boismortier’s Automne, Charpentier’s In Nativitatem N.S.J.C. Canticum, and joining the Boston Early Music festival in the North American premier of Campra’s opera Le Carnaval de Venise.

A specialist in the French baroque vocal repertoire, he is the co-founder and artistic director of Les Enfants d’Orphée, an ensemble dedicated to bringing the music of the French Baroque to North American audiences. With Les Enfants, he has worked to revive the cantatas by Clérambault as a part of the John Kleshinsky Concert Series in Boston. A renowned scholar of Jewish music, Mr. Pomerantz joined the Orchestra of New Spain in Dallas as a soloist in The Triangle of Al-Andalus, a celebration of Sephardic music. He holds a Bachelor of Music in Voice Performance from Westminster Choir College and a Masters of Music in Voice from Longy School of Music of Bard College, with additional study in France.