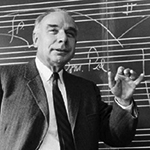 In 1968, G. Wallace Woodworth led a program of J.S. Bach, Claudio Monteverdi, and Giovanni Gabrieli, the latter works the first non-Bach music to appear on a Cantata Singers concert. He was noted for his wide range of repertoire and often appeared as guest conductor with ensembles throughout New England, including the Boston Symphony Orchestra, which he led in performances of Bach’s Mass in B minor in 1958.

He attended the Royal College of Music in London, studying conducting with Malcolm Sargent from 1927 to 1928. He graduated with a Bachelor of Arts from Harvard College in 1924 and a Masters degree from Harvard in 1926. His book The World of Music was published in 1964.

Professor Woodworth, known as “Woody” by students and faculty, was on the faculty of Harvard College for forty-four years, during which time he had enormous impact on music education across the university. He led the Radcliffe Choral Society, the Pierian Sodality Orchestra, and the Harvard Glee Club, and in 1940 he was appointed Organist and Choirmaster of the Harvard University Chapel. In 1954, he was awarded the James Edward Ditson Professorship in Music, and he taught through the day before he died in 1969, when he was 66 years old.