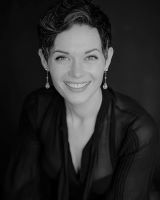 American contralto Emily Marvosh has been gaining recognition for her “plum-wine voice,” and “graceful allure,” on the stages of Carnegie Hall, Jordan Hall, Disney Hall, Lincoln Center, Prague’s Smetana Hall, and Vienna’s Stefansdom. Following her solo debut at Boston’s Symphony Hall in 2011, she has been a frequent soloist with the Handel and Haydn Society under the direction of Harry Christophers. Other recent solo appearances include the American Bach Soloists, Boston Baroque, Phoenix Symphony, Chorus Pro Musica, Music Worcester, the Boston Early Music Festival Fringe, and the Princeton Festival.

She is a core member of the Lorelei Ensemble, which promotes innovative new music for women. With Lorelei, she has enjoyed collaborations with composer David Lang, the Boston Modern Orchestra Project, Duke Performances, and the Boston Symphony Orchestra.

This season includes engagements with the Eugene Symphony, Baroque Chamber Orchestra of Colorado, Tucson Symphony Orchestra, and the Rochester Philharmonic.

Miss Marvosh can be heard on two recent GRAMMY-nominated recordings: Brahms's Ein Deutsches Requiem with Seraphic Fire, and Prayers and Remembrances with True Concord Voices and Orchestra. She belongs to Beyond Artists, a coalition of artists that donates a percentage of their concert fees to organizations they care about. She supports Common Cause and Rosie’s Place through her performances. She holds degrees from Central Michigan University and Boston University. http://www.emilymarvosh.com