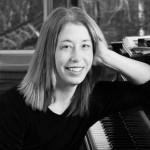 American composer Elena Ruehr is reaching a critical mass of public recognition after a quarter century of steady work in multiple genres, increasing numbers of commissions, the ardent loyalty of a growing cadre of artists who champion her work, and enthusiastic response from audiences and critics alike. An award winning faculty member at MIT, she is also a Guggenheim Fellow and has been a fellow at Harvard’s Radcliffe Institute.

Elena Ruehr’s oeuvre includes compositions for chamber ensemble, orchestra, chorus, wind ensemble, instrumental solo, opera, dance and silent film. She was composer-in-residence with the Boston Modern Orchestra Project from 2000-2005, where the orchestra premiered her pieces Shimmer, Sky Above Clouds, Ladder to the Moon, and her opera Toussaint Before the Spirits. Her five string quartets have been championed by the Cypress, Biava, Borromeo, Lark and Shanghai String Quartets. Her other recordings include Averno (Avie Records with the Trinity Choir, Julian Wachner, conducting), Jane Wang considers the Dragonfly (various artists on Albany) and Shimmer (Metamorphosen Chamber Ensemble on Albany).

In November 2011, the San Francisco Contemporary Music Players announced the TenFourteen Project, a commission for chamber works from an international group of ten distinguished composers, including Elena Ruehr, Ken Ueno, Agata Zubel, George Crumb, Chou Wen-chung and five others. Ruehr’s new chamber work will be performed in San Francisco as part of the 2014-2015 season of the San Francisco Contemporary Music Players, under the direction of the group’s Artistic Director, Steven Schick.

Dr. Ruehr studied composition with William Bolcom at the University of Michigan, and Vincent Persichetti and Bernard Rands at The Juilliard School. She has also studied modern dance, and played in Javanese and West African performing ensembles. Ruehr has taught at MIT since 1991 and lives in Boston with her husband and daughter.

When David Hoose asked me if I would be interested in writing a new work for Cantata Singers, I was deeply honored to be commissioned by a group that I so highly respected. Although it wasn’t a requirement, David suggested working with a spiritual or religious text. I decided that perhaps a cantata about Eve (from Genesis) would be a good idea, since her story has interested me since I was a teenager. And after a little research, I realized, as far as I could tell, no famous cantatas had ever been composed about her. So I went back to the source: I pulled out my King James and re-read Genesis 3. What I found was an amazing cantata just waiting to be written.

For me, the most important question about the cantata’s text was where to stop. I chose to stop right at the phrase ("and the eyes of them both were opened...") before Eve is cast out of Eden. In this reading, the emphasis is on Eve’s choice to embrace knowledge, even though God forbids it. And in a sense, she is choosing light over darkness, sight over blindness. It’s an astonishing idea.

In my cantata, I try to tell Eve’s story in a straightforward manner. References to older cantatas abound. For example, the use of soloists and chorus in counterpoint and the way the final line is developed in extended canonic treatment, make reference to such great works as the “Hallelujah Chorus” from Handel’s Messiah or any choral work that dwells on an idea or lesson.

I composed the musical line for the final text “and the eyes of them both were opened” first, and it forms the basis of the work's entire harmonic material. (In moveable Do. “Sol-Ti-Do-Re-Me,” or 5-7-8-2-3 of a minor scale, the melody includes notes of both the I and V chords.) This five-note melody, which can fit squarely into a traditional harmonic minor scale, is used to imply the past through standard melodic and harmonic usage. It is also used to generate harmonies that are more open than standard triadic harmony (open Perfect Fifths contained in the root harmony, which form the basis of the opening sound), or more complex and contemporary, as in the final chords that are built from the full five-notes. For instance, this main five-note set occurs as a kind of row, or sequence, when the serpent speaks for the second time. It also creates a simpler Eve when used as a group of two triads, as well as a more complex Eve when used as a five-note harmony. These dual possibilities suggested to me the multiple interpretations of her character and actions.

My cantata opens with simplicity and stability and ends with a series of questions: are we better off out of the garden? Are we still experiencing the fall? Sometimes I think that the fall is still in progress, and that our own consciousness and knowledge are the true agents of our being cast out of the garden of earth. But my ending question might be the most relevant now: can we also be the agents of our own salvation? I sincerely hope so.