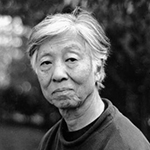 Earl Kim led Cantata Singers in an all-Mozart program in April of 1972. Pianist, conductor, and distinguished composer, Kim studied with Arnold Schoenberg, Ernest Bloch, and Roger Sessions. He is best known for his musical theatre compositions, vocal works, and art songs. Several of his choral compositions have appeared on Cantata Singers concerts, including two during the 2012-13 season. Mr. Kim was awarded numerous grants and commissions for his music, and he served as composer-in-residence at the Marlboro, Dartmouth, Tanglewood, Cape and Islands, and Aspen music festivals. He was also co-founder and president of Musicians against Nuclear Arms.

Mr. Kim served on the music faculty at Princeton University from 1952 to 1967. He then accepted a teaching position at Harvard and taught on its music faculty until his retirement in 1990. Earl Kim was married to the violinist Martha Potter Kim.