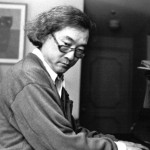 Donald Sur, a composer and musicologist, was best-known for The Slavery Documents, an oratorio commissioned by Cantata Singers. The work, which was given its premiere at Symphony Hall in Boston in 1990, incorporated spirituals and folk songs as well as excerpts from the Bible and other writings. Most of his works were composed for small chamber ensembles, including Catena I, II, and III, and The Book of Catenas.

Mr. Sur was born in Honolulu and moved to Los Angeles after World War II. He later earned graduate degrees at Princeton and Harvard and studied composition with Rogers Sessions and Earl Kim. After moving to the Boston area in the 1970s, he taught at Harvard, the Massachusetts Institute of Technology, Tufts, Wellesley College, and Boston University. He passed away on May 24, 1999.

His compositions also include "New Yorker Sketches," "Catena III," "Kumdori Tansaeng," a work for violin, chorus and orchestra, and Berceuse for Violin and Piano, which had its premiere at the Library of Congress in February.

Slavery Documents traces its origins to readings on the Civil War and slavery that preoccupied me beginning in 1984. The resultant text, which is a collage of passages from antebellum sources, was completed in 1986. Actual work on the music began in the summer of that year. The Cantata Singers and Ensemble, with major support from the Massachusetts Council on the Arts and Humanities, was able to offer me a commission in the fall of 1986, at which time I started on my three-year odyssey living and working at artist colonies, including the Virginia Center for the Creative Arts, MacDowell Colony, Cummington Community of the Arts, and Ragdale Foundation, until the completion of the piece in December 1989.

Questions and answers from Cotton Mather's catechism for his slaves entitled The Negro Christianized form the framework of the first part of the piece centering around slavery and religion. Also used are a query by a slaveholder quoted by the Huguenot missionary Francis Le Jau; a passage from The Confessions of Nat Turner, arguably the most significant work of American literature of the pre-Civil War era; a list of punishments compiled by the abolitionists Theodore Weld and Angelina Grimke Weld in their momentous and incendiary work American Slavery As It Is; and a verse from Ephesians conveniently truncated from its consequent clause and used by pro-slavery apologists as Biblical validation of slavery. The second part consists of a passage from “The Hireling and the Slave," by the South Carolina poet William Grayson, interspersed with advertisements for runaway slaves published in Southern newspapers and compiled in American Slavery As It Is.

As to the musical style of the work, the subject matter seemed to demand a traditional and straightforward harmonic approach, with the triadic texture having the added bonus of articulating architecture in the large rather efficiently. It was also relatively easy within this traditional framework to incorporate musical materials of the period such as spirituals and Stephen Foster songs. In regard to the latter, I had envisioned using them with a touch of irony as a sentimental backdrop to the Utopian view of plantation life expressed in the Grayson poem. But in working with the songs it became clear that a deeper emotion was in play, leading me to reconsider Foster's intent in writing them. It seems many of his songs relating to plantation life represent the nostalgic recollection of a runaway slave unable to return. Rather telling is the fact that the original version of "My Old Kentucky Home" was based on a reading of Uncle Tom's Cabin, a work that fueled abolitionist fires and was detested in the South. Even a song such as "Massa's in the Cold, Cold Ground" has an ambiguous aspect of deadpan to it. I don't mean to suggest that Foster was a crypto-abolitionist, but it is interesting that he didn't hesitate to write propaganda songs for the Union cause during the Civil War.

Published collections of slave songs that I have studied in libraries in both Boston and Charleston, recordings of the Sea Islands traditions I have heard, and services I have attended in various parts of South Carolina and Virginia have, I think, in a general way left their traces in Slavery Documents. A particularly memorable item was a cylinder dating from the 1880's to which I was able to listen at the Hampton University Archives. In terms of specific melodies, however, only parts of three spirituals outside of the Foster songs are actually quoted. A Gospel flavor is evident in the "Holy and Righteous" section prior to the orchestral interlude in the first part. Apropos of this, Nathan Huggins observed at a presentation I gave of the work at an early stage that the combination of gospel and baroque textures occurring in this section suggested to him the dark and light sides of the Enlightenment, when the founding fathers were not able to deal with the slavery issue in creating the new nation. This was a surprising notion that hadn't occurred to me at the time, but I now see that indeed this failure haunts our country down to the present day.