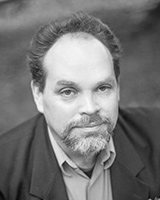 Brian Church, baritone, has sung with Cantata Singers for eighteen seasons, during which time he has been a soloist, section leader, and teacher with Cantata Singers’ Classroom Cantatas program. He is also a longtime member of the Choir at King’s Chapel.

With Guerilla Opera, he has taken part in twelve productions, including ten premieres and two commercial recordings. He has also performed as a substitute member with the Grammy-winning vocal octet Roomful of Teeth. This past spring, Mr. Church performed Peter Maxwell Davies’ 8 Songs for a Mad King with Callithumpian Consort in Anchorage, Alaska, and he performed the role of Julius Rosenberg in the North American premiere of Joachim Holbek’s The Rosenbergs: an Opera, with Boston Playwrights’ Theater.

For eleven years, Mr. Church played electric bass with the acclaimed avant-noise punk trio Tristan Da Cunha. He recently released his second solo album, Then That Soon I See, and is currently recording his third. He teaches music in the Winchester Public School System and at Music 101 Studios in Melrose.