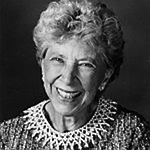 As guest conductor for Cantata Singers in January 1988, Blanche Honegger Moyse led a program of three Bach cantatas, as well as the Sinfonia to Cantata BWV 42.

A violinist, conductor, and powerful musical presence, Mrs. Moyse was integral to the development of music performance and appreciation in Vermont. She helped found the Marlboro Music Festival (her colleagues included Rudoph Serkin and Pablo Casals), established and then chaired for twenty-five years the Marlboro College Music Department, and founded the Brattlebroro Music Center. She was a student of Adolph Busch, George Enescu, Wanda Landowska, and Andrés Segovia. At sixteen, she made her solo violin debut with L’Orchestre de la Suisse Romande in an acclaimed performance of the Beethoven Violin Concerto. Mrs. Moyse was married to the flutist, composer and pianist Louis Moyse; the two joined his father, flutist Marcel Moyse, to create the Moyse Trio.

Blanche Moyse was beloved for her devotion to the choral works of J.S. Bach, and she led many memorable readings of the Passions and Mass in B minor as part of the New England Bach Festival, performances that she continued to conduct well into her nineties. In 2000, Choral Arts New England awarded her the Alfred Nash Patterson Lifetime Achievement Award for her contribution to choral music in New England.