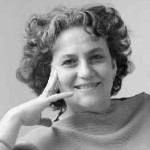 Betty Olivero is a contemporary Israeli composer, who has lived during most of her career in Florence, Italy.

In Olivero's works, traditional and ethnic music materials are processed using western contemporary compositional techniques; traditional melodies and texts undergo processes of development, adaptation, transformation, assimilation, resetting and re-composition, to the point of assuming new forms in different contexts. These processes touch on wide and complex areas of contrast, such as east and west, holy and secular, traditional and new.

In 2000 Olivero was awarded the prestigious Koussevitzky Award by the Koussevitzky Music Foundation and the Library of Congress, Washington USA, one of the most important international awards, given annually only to six composers.

Between 2004-2008 Olivero was composer-in-residence for the Jerusalem Symphony Orchestra.

Olivero is currently living in Israel. She is a mother of two children and is a full professor of composition at the Music Department in Bar-Ilan University.

The American Guild of Organists commissioned Betty Olivero to write a piece for Cantata Singers. The premiere took place as part of the AGO 2014 National Convention in Boston, MA.

Betty Olivero has written a solemn, moving choral piece for SATB chorus and soloists, clarinet, accordion, piano and harp using a compilation of psalm verses of supplication. The title, Lo Ira Ra is taken from Psalm 23 and is translated “I Will Fear No Evil.” Each voice in this composition speaks in dialogue with the others in the style of Middle Eastern heterophony. There is essentially one melody that is played and sung differently by each voice in the composition, each voice inspired in part from the music rising from the swarming population of Jerusalem. The Psalms themselves are shared by a number of religions and in this piece the text and music reflect the reality of the music that is already shared.

“I find the process of confronting and juxtaposing traditional, formal means with contemporary vocabulary to be highly challenging and of great curiosity. One of the most fundamental issues in my work, and the aim of my musical creation, is to use traditional, ethnic music materials in the compositional processes and thereby participate in the essence of oral tradition: transmission of essence, through evolution of expression: preservation and change. I do not seek these materials out of any scientific-musicological point of view. They serve purely as a dramatic stimulus and as a point of reference. Close scrutiny of these sources uncovers hidden, unpremeditated musical means, which invite further extension and development. These traditional melodies and texts undergo thorough transformation, so profound as to make their original form, at times, unrecognizable, yet their spirit and highly-charged dramatic potential remain untouched.”