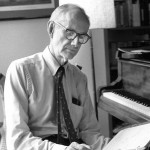 Born in New York City on 6 April 1921, Andrew Imbrie studied with Leo Ornstein, Nadia Boulanger, and Roger Sessions, with whom he studied from 1937 to 1948. He taught at the University of California at Berkeley beginning in 1949, and at the San Francisco Conservatory beginning in 1970. Imbrie composed works for orchestra, chorus, chamber ensemble, and stage, and his music has been praised for its profound integrity, ardent expression, and an intense drive and conviction. Imbrie's list of prestigious commissions and honors begins from his earliest days as a composition student. The first of his five string quartets, written while at Princeton, won the New York Music Critics' Circle Award in 1944. Other commissions include works for the New York Philharmonic, San Francisco Symphony, Halle Orchestra, San Francisco Opera, the Naumburg Foundation, Ford Foundation, and the Pro Arte Quartet. His awards include the Prix de Rome, two Guggenheim Fellowships, The Walter M. Naumburg Recording Award, and membership in the American Academy and Institute of Arts and Letters. Andrew Imbrie passed away on Dec. 5, 2007 at his home in Berkeley, CA.

In searching through anthologies for a cantata text, I was struck by the power and beauty of a collection of anonymous 15th century English lyrics on the one hand, and of a body of American poetry of the Civil War era on the other. It occurred to me that for musical purposes the two groups could be made to complement one another if juxtaposed.

The five carols of the first part begin with a recitation by the male chorus of the story of Adam, the apple, and original sin, “as clerkes finden written in theire book." The people (as represented by the male chorus) contribute the insight that “Ne hadde the apple taken been, Ne hadde never our lady aye been Heaven’s queen.” The women's chorus then responds with a depiction of Mary and the Christ-child and the miracle of the virgin birth. In the third movement, the full chorus first announces (a cappella) the birth of Christ, who then enters into a conversation with his mother. Her part is taken by the soprano soloist. The chorus itself takes the part of the Christ-child, who foretells the crucifixion. There follows an extended orchestral prelude to an a cappella “chorale,” in which the chorus, once again representing Christ, “speaks” directly to Mankind. The last movement of Pan One (“A God and Yet a Man?”) may be regarded as a summation—of the people’s struggle to understand the foregoing mysteries—a struggle in which skepticism must be conquered, one way or another, by faith.

Part Two ushers us into a New World, in which observed Nature plays a prominent role. The first movement (“Low Anchored Cloud”) is in a sense an opening prayer: “Spirit of lakes and seas and rivers, Bear only perfumes and the scent of healing herbs to just men’s fields." The chorus sings, essentially, a single wide-ranging melody, overlapping and continuing from bass to soprano and back, while the orchestra attempts to suggest the moist atmosphere of Thoreau’s Newfoundland cloud-bank. The second movement (“Beat! Beat! Drums!") is in rude contrast to the foregoing: Whitman’s vivid call to arms overrides all daily mundane concerns and occupations. The movement is treated as the climax of the cantata as a whole; and it is followed by a setting of Melville’s “Shiloh,” a contemplation of the tragic aftermath of war. The text is sung by the soprano soloist, with the male chorus in the background repeatedly intoning the name of that battlefield. Second thoughts about the glory of war can be summarized in the passage: “Foemen at mom, but friends at eve, Fame or country least their care. (What like a bullet to undeceive!)” With “The World Below the Brine" we now allude once more to Nature and to atmosphere, and to Whitman’s suggestion of an analogy: just as the creatures living under water seem like a primitive form of life compared to our own, so ours may be regarded in the light of a transition “to that of beings who walk other spheres." The final movement, “To Make A Prairie,” continues the theme of a possible redemption through faith. Emily Dickinson’s brief understated poem is sung by the soprano soloist, and the music recalls motives from the second movement of Part One, with its contemplation of the virgin birth.