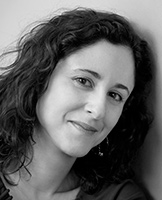 Conductor Amy Lieberman is equally at home in choral music, orchestral music, chamber music, and musical theater. She is on the faculty of the School of Jewish Music at Hebrew College, where she conducts Kol Arev chamber chorus, coaches art song, and teaches musicianship and conducting. Ms. Lieberman is also Artistic Director of ArtsAhimsa, an international performance series dedicated to the promotion of non-violence through the arts; as part of her work with ArtsAhimsa, she conducts the chorus at its summer festival in the Berkshires, and she has given concerts and master classes in Calcutta and New Delhi, India. She is also a founding member and Music Director of Vocollage, an ensemble of three artists who present, in live performance and radio broadcast, theatrical works that interweave words, music and drama.

Ms. Lieberman has presented pre-concert lectures for Cantata Singers, Boston Symphony Orchestra, Concord Chamber Music Society, and the Rhode Island Philharmonic. Her music degrees are from Stanford University and the Yale School of Music, where she was Assistant Conductor of the Yale Glee Club and a frequent guest conductor on the New Music New Haven series. She also studied conducting at the Aspen Music Festival and at the Prague Conservatory in the Czech Republic. Ms. Lieberman is currently completing her doctorate in Conducting at the Boston University School of Music. During the Spring of 2015, she is in an interim faculty position as Director of Choruses at Northeastern University.